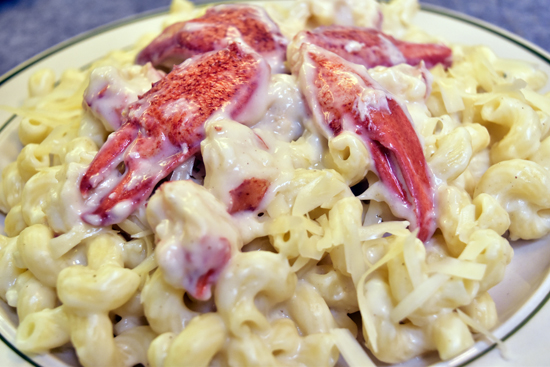 A plated serving of my own version of Lobster Macaroni and Cheese, described in the recipe at the bottom of this page.

Lobster Macaroni & Cheese appears to be a very recent development. It’s served in numerous restaurants in Maine as a relatively high-end dish, made with Cavatappi or “corkscrew” pasta that’s folded with a flavorful, creamy, somewhat decadent cheese sauce, and topped with 4 to 6 ounces of fresh lobster meat that’s likely only been fished within the previous 24 hours. The dish can also be found across the country, such as at Put-In-Bay, a resort island community that’s popular with tourists in Lake Erie, just northeast of Toledo, Ohio. 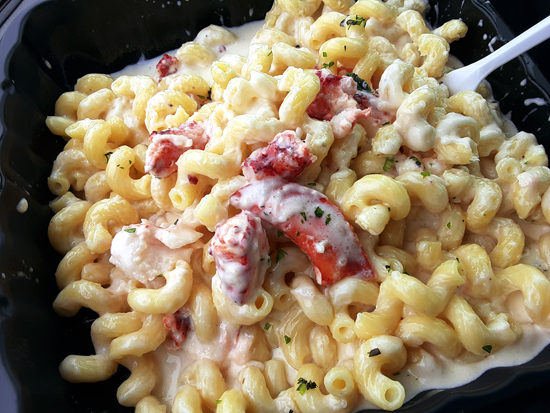 The Lobster Macaroni & Cheese from McSeagull’s in Boothbay Harbor, Maine, on May 11, 2020. During the COVID-19 shutdown at that time, the dish was only available for curbside pickup.

Discussions online tend to bring up various possible histories, including conjecture about Lobster Macaroni and Cheese being the result of further development of the recipes for Lobster Newburg or Coquilles St. Jacques, and the mention of a dish from Thomas Keller’s “French Laundry Cookbook” presenting lobster and pasta in a mascarpone sauce.

Bring the dish up with someone of Italian descent and prepare for fireworks. Seafood and cheese apparently must never be used within the same dish. This apparent gaff on the part of patrons is such that some Italian restaurants won’t even allow diners to request shredded Parmesan on their Shrimp Linguini.

In examining the conjecture regarding Lobster Macaroni & Cheese we find that the Delmonicos, who were immigrants from Switzerland in the 1820s, opened their first eatery in New York in 1827. It was in the early 1890s that patron Ben Wenberg demonstrated to Delmonico’s Chef a method of preparing lobster he’d observed in South Africa. This dish was then offered in the resturant as “Lobster Wenberg” … That is, until Mr. Wenberg started a brawl within Delmonico’s. The dish was then renamed “Lobster Newberg.” [Levinson, 1964]

Recipes for Coquilles St. Jacques, a classic French King Scallop dish with oysters, shrimp, mushrooms and onions in a butter sauce with grated cheese, shows up in American cookbooks as early as [Kirk, 1947], baked in either greased scallop shells or individual ramekins. Later versions present the dish as a “Real Fine Scallop Casserole” without oysters, shrimp, mushrooms or onions, and baked in a single glass casserole dish. [Shibles, 1975] Again however, no lobster or pasta are involved.

The history of Lobster Macaroni and Cheese, however, appears to go back more than a century, outside of the suggested dishes and far earlier than Thomas Keller’s work. We also find that cheese and seafood have gotten along quite well in Italian dishes for quite some time.

In 1888 Harriet A. De Salis published a small cookbook in both London and New York, “Oysters à la Mode: The Oyster and Over 100 Ways of Cooking It.” Split between pages 42 and 43 of this book was a recipe for Sorrento Oysters. This appears to be an early upscale version of the dish we know today, if not the earliest, combining cooked macaroni with oysters, Parmesan, and cream, then browning individual servings in scallop shells for an elegant presentation. [De Salis, 1888]

Sorrento Oysters
Stew some macaroni in gravy till tender, seasoning with cayenne and salt to taste; then take equal parts of oysters and macaroni, and chop them up together, and mix well in a stewpan with some grated Parmesan cheese, a little butter, and enough cream to moisten all sufficiently; stir it on the fire till hot, then fill your scallop shells with the mixture and brown them before the fire. Serve immediately.

It’s important to note that the publication of the recipe for Sorrento Oysters predates the appearance of Lobster Wenberg, later known as Lobster Newburg, by at least two years.

Interestingly enough, six years earlier the same publisher of [De Salis, 1888] published Cookery and Housekeeping, A Manual Of Domestic Economy for Large and Small Families by a Mrs. Henry Reeve. The work contained the following recipe, an obvious predecessor to the later Sorrento Oysters but lacking cheese:

Oysters and Macaroni
Lay some stewed macaroni in a deep dish; put upon it a thick layer of oysters, bearded, and seasoned with cayenne pepper and grated lemon rind; add a small teacupful of cream; strew breadcrumbs over the top and brown it in a pretty quick oven. Serve hot, with a piquante sauce. [Reeve, 1882]

The lack of cheese in this particular version gives the indication De Salis was the originator of the version combining shellfish with Macaroni and Cheese.

A variation of De Salis’s Sorrento Oysters then shows up in [Farmer, 1896] as Oyster and Macaroni Croquettes. In this version a similar mixture made with Farmer’s Thick White Sauce is cooled, shaped into patties, dipped in crumbs, egg, then crumbs again before being fried in fat. However, this variation of Farmer’s does not appear in her earlier work published in 1884. The implication here is that Farmer derived this 1896 version of her recipe from [De Salis, 1888].

Oyster Macaroni and Cheese is still a popular dish. It shows up as a recipe in numerous locations in a web search, and is served at oyster festivals, restaurants, and from food trucks, as well as as a deep-fried snack or appetizer similar to Farmer’s version.

Combining lobster instead of oysters with pasta may have first occured in the kitchen of a rather well-known Italian restaurant in New York City in a dish quite similar to what is served today. Ironically, the Italian immigrants there combined cheese and lobster in a manner that other Italians today claim cannot be allowed. 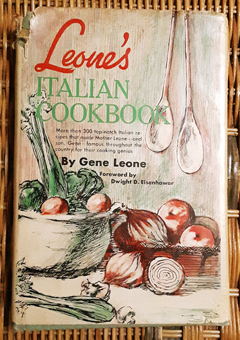 Luisa “Mother” Leone opened Mamma Leone’s restaurant with her husband Gerome’s blessing (at family friend Enrico Caruso’s urging) on April 27, 1906, with 20 seats. Over time, and with a move to 239 W. 48th St. (now an alley next to La Masseria), the restaurant grew to seat 1,500, serving 6,000 covers on busy evenings. Gerome died in 1914. Luisa died on May 4, 1944, and son Gene bought his sister out in 1952 to become sole owner. The restaurant served Eisenhower, George M. Cohan, W.C. Fields, Victor Herbert, Liberace, and countless others. Chef Gene sold the restaurant to Restaurant Associates on June 9, 1959. Restaurant Associates operated Mamma Leone’s until closing it for good on January 10, 1994.

In 1967 Chef Gene published Leone’s Italian Cookbook containing the restaurant’s story, as well as more than 300 recipes served in the restaurant from 1906 to 1959. Among those recipes was Chicken Lobsters with Vermicelli. 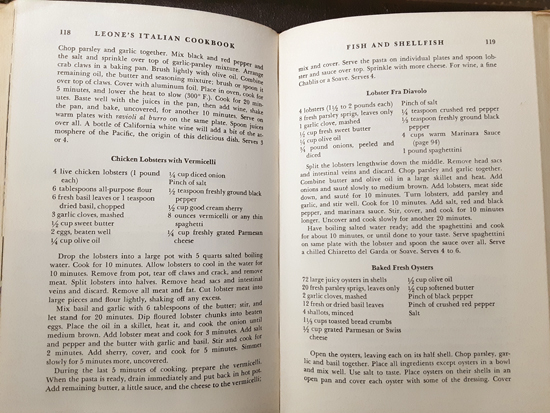 The recipe for Chicken Lobsters with Vermicelli as printed in Leone’s Italian Cookbook. The recipe for the restaurant’s popular Lobster Fra Diavolo was also included on page 119, on the right.

Below is a downloadable copy of Mamma Leone’s Chicken Lobsters with Vermicelli.

A couple of points about the recipe are, firstly, that it specifies vermicelli or “a thin spaghetti.” Moving to a style of macaroni noodle would then provide more body to the dish, creating more of a comfort food. Secondly, the procedure includes a style of pan-frying of the cooked lobster meat. As Lobster Macaroni and Cheese traditionally uses lobster meat coated with either warm clarified butter or some of the cheese sauce intended for the noodles, the transition from the Leone recipe to the Maine specialty becomes rather straightforward.

It’s possible Mother Leone’s Chicken Lobsters with Vermicelli wasn’t the first instance of this dish. It’s also unknown whether she or her son Gene developed it, when it may have first been served in the almost six decades the restaurant was open, or if someone taught it to them similarly to how Wenberg taught his dish to the Chef at Delmonico’s. However, Chicken Lobsters with Vermicelli is certainly a precursor to what restaurants in Maine are serving today. 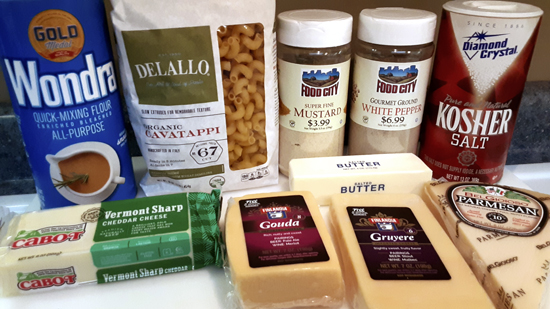 The ingredients needed for the recipe below, minus the milk and the cooked lobster meat. 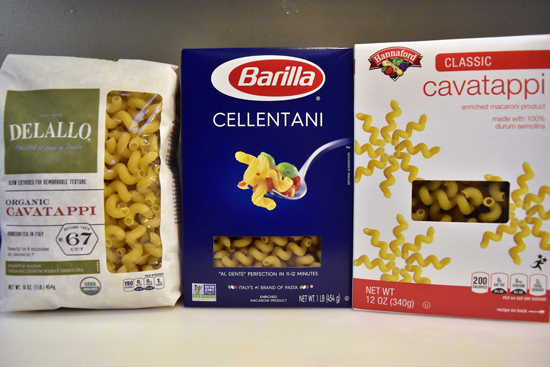 “Cellentani™” is a Registered Trademark of Barilla, and is the original corkscrew pasta. Because of this trademark, other brands market their versions of the pasta under the name Cavatappi.

How do you determine how much lobster to cook? According to Lobster Anywhere the following yields are standard: 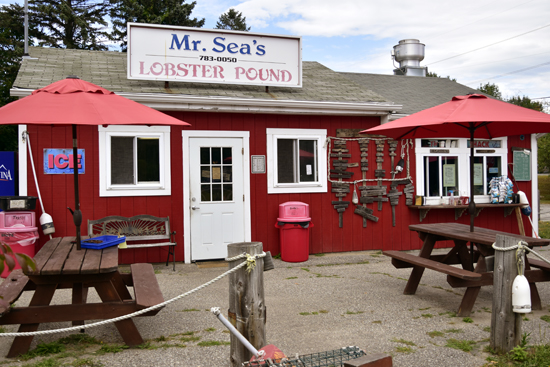 Mr. Sea’s Lobster Pound in Lewiston, Maine, one of my favorite sources for fresh lobster. 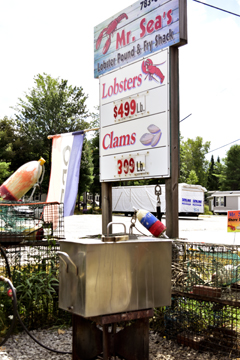 Left: The steamer in front of Mr. Sea’s Lobster Pound, with the sign showing per-pound prices on August 21, 2020. (Note: These prices change daily.)

Besides knowing what size lobsters to get based on how many people you’re serving and whether the lobsters are soft-shell or hardshell, it’s important to get the freshest lobster possible. Many lobster pounds and some fishing companies in Maine will overnight live lobsters, two or three day for longer distances, but they’re still likely fresher than many grocery store lobsters.

In Maine I’ll get fresh lobsters from a place such as Mr. Sea’s Lobster Pound in Lewiston. Mr. C. himself sources these lobsters and other crustaceans from fishermen during multiple trips to the docks every day. His daughter Mjae is now the owner of the Pound, and makes sure her staff are all properly trained in preparations of steamed lobsters, fried whole belly clams and calamari, and plenty of other fresh seafood. Their expertise in this area, coupled with current market prices, meant that the two 1 lb freshly-fished lobsters I ordered steamed for this recipe on August 21, 2020, came to $13. (Note that lobster prices change daily and seasonally. The prices I paid will be different on any other given day.) 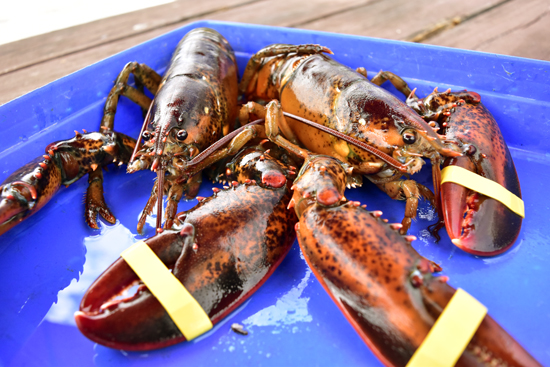 My two 1 lb lobsters prior to going into Mr. Sea’s steamer. 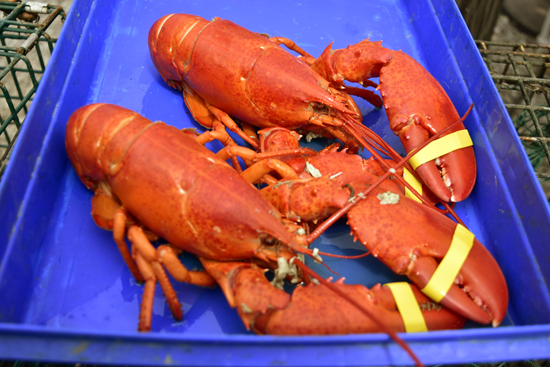 The cooked lobsters, ready for picking, then saucing with the cheese sauce made with Gouda, Gruyere, and Cheddar, before plating on top of the Cavatappi Macaroni and Cheese with shredded Parmesan. 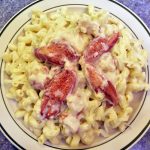