It’s fun and interesting to me when I find a historical item that then shows up in-use in all kinds of places. Most times it’s quite harmless, and people simply don’t worry about it. What’s fun is when print shops and publishers claim copyright, or “Illustrations by”, when “their” infographics are clearly based on a previous work. In this case though, the images are in the public domain.

Learning how to eat a whole lobster is not only a necessary bit of information in the state of Maine for those trying their hand at it for the first time, but most publishers are also using the same set of infographics published by the state in the early 1950s. 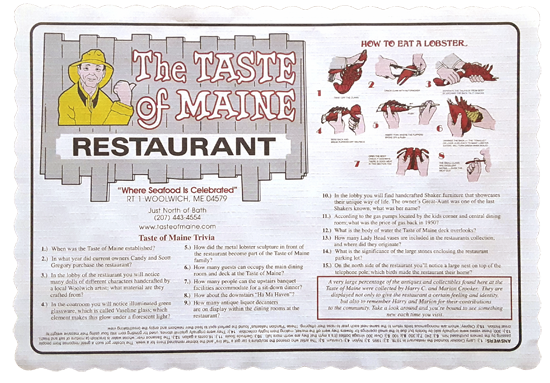 The instructional placemat at Taste Of Maine in Woolwich on U.S. Rt. 1.

Our daughter’s serving of Double 1-1/4 lb Boiled Lobsters at Taste Of Maine on April 21, 2018. This item is also available in a single or a triple serving.

I had first attempted to eat lobster in May of 1991 at a popular seafood restaurant on the east coast. I won’t say which restaurant, as it’s still open at the time of this writing and they’re still serving lobster as they always have to happy customers. But to say that I was sorely disappointed is an understatement. I had no idea how to open the thing as it didn’t come with instructions, and the meat was not only a bit tough but rather rubbery as well. The flavor seemed “off”, not being anything like any crab I had ever eaten of any variety, including Chesapeake Bay blue crab, Opelia, or King. I decided lobster is nothing more than an expensive way to eat melted butter.

It wasn’t until we ended up in Maine for six months beginning in April of 2018 that I finally had the opportunity to try fresh local lobster that had been cooked in a kitchen specializing in northern Atlantic seafood. The first full day we were there we ended up at the Taste Of Maine restaurant in Woolwich, where our daughter ordered the Double 1-1/4 lb Boiled Lobsters seen in the above photo.

With a lot of their patrons being from out-of-town or out-of-state the restaurant’s placemats give detailed instructions on how to break down a whole lobster. Once we followed the instructions, along with some good hints from our server, we all tried it.

The difference between any other lobster I’ve tried and the meat from those two animals from Maine waters that had also been cooked nearby in a Maine restaurant was rather eye-opening. The meat was sweet and moist, very tender, and had a rich flavor that I felt had been missing in all the other dishes I’d attempted to enjoy for almost thirty years. 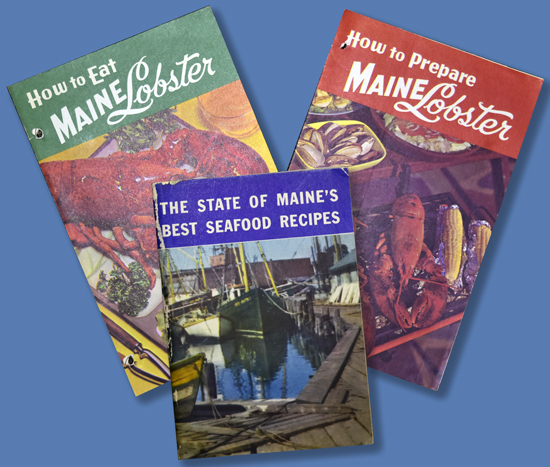 In the summer of 2018 while making the rounds of the flea markets and antique shops of downeast Maine, I stumbled onto the above small pamphlets. Published by the State of Maine’s Dept. of Sea & Shore Fisheries, the smaller recipe book had seen multiple printings while the larger single-page folded pamphlets were published sometime between 1950 and 1953. These items were mentioned in “The Maine Development Commission and it’s Duties, 1953”:

“Advertising … Over the years, we have done a great deal of advertising of our seafood products in metropolitan newspapers and food magazines. We have also carried radio programs from Boston and New York calling attention to our fine seafoods. A seafood recipe book was issued and thousands of these booklets have been distributed all over the eastern half of the United States. In fact, we have never been able to keep up with the demand … Publicizing … One member of our publicity staff devotes more than half of his time to publicizing the products of the sea. We have been able to have splendid publicity stories in newspapers and feature stories and pictures in national magazines. We have helped many different groups in putting on Maine seafood dinners in many sections of the country. We have developed a lobster bib with the word ‘Maine’ and a red lobster prominently printed thereon. These bibs are used not only at the seafood dinners but the seafood dealers in many of our large cities use them where Maine lobsters are sold. These bibs are very prominent in news pictures taken at these affairs. A little folder, ‘How To Eat A Maine Lobster,’ profusely illustrated, is also widely distributed.

The Maine State Library tries to keep PDF copies of all the state’s publications online in digital format, but “How To Eat Maine Lobstar” isn’t among them. Below is a PDF copy of my own copy, which you can also download here.


The Maine Development Commission was the department responsible for the publication of these pamphlets. The Maine State Library catalog shows three different entries for “How To Eat Maine Lobster”:

“An executive committee was formed to work with and advise the group from the very first festival and still continues today. The first officers were, Wayne Buxton of the Maine Development Commission; Owen Smith, editor of the Maine Coast Fisherman; Rudolph O. Marcoux, National Sales Director of the Maine Broadcasting System and Percy Keller, Camden’s town manager. In addition, the Maine Sea and Shore Fisheries Commission, in the person of Richard Reed, assisted the executive director.”

I enjoyed lobster rolls that entire summer of 2018 in Maine, but hadn’t attempted a whole one myself. I finally enjoyed my own first whole lobster at Gurnet Trading Co. in Brunswick, Maine, on September 13, 2018. When the live lobster I’d chosen was delivered steaming to our table, the platter the lobster was resting on caught my eye: 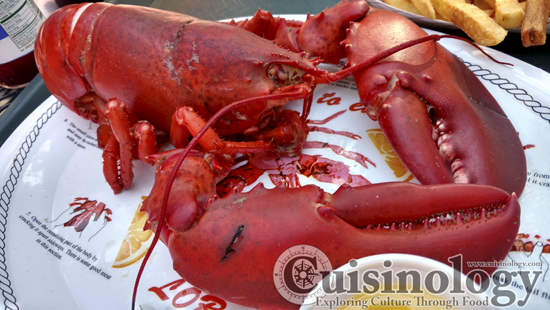 In the restaurant I was able to pick up a package of the platters as a souvenir of my first lobster. The platters bore the label “Made in China for Christmas Tree Shops, Middleboro, MA”: 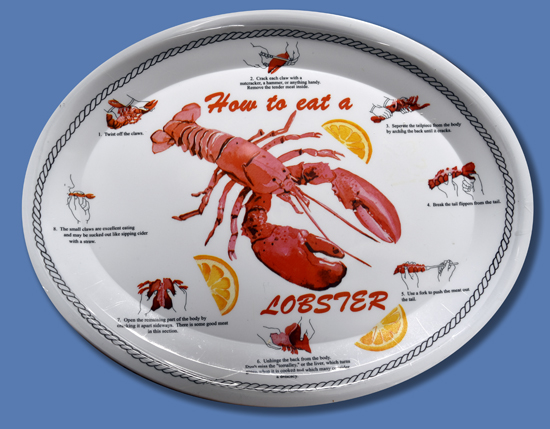 The infographics on the platters were at that point rather familiar to me. Once I got them home I was able to compare them to the inside of “How To Eat Maine Lobster”. Below is a restored image of the inside of the ca. 1950s pamphlet. 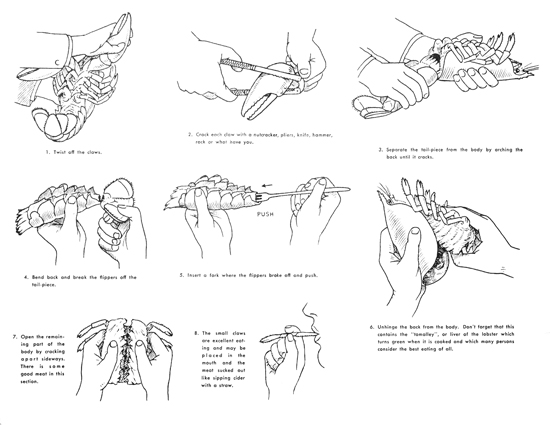 One issue is that there are two steps missing from these infographics, and not one example I could find included these necessary missing steps:

In comparing the platters with the pamphlet it was obvious the images were identical, save for some coloring for enhancement of certain aspects of the lobster throughout the process, the final image being reversed, and only some of the text being updated. Here was something made almost seventy years after the original images were published, only slightly modified, and not a copyright notice in sight or credit given.

I sent a few questions along to the Maine State Library about the three copies of “How To Eat Maine Lobster” listed in their catalog. On September 24, 2018, Reference/Documents Librarian Sarah Stanton provided the following information:

“Our earliest version is from 1950 – there isn’t a date on the actual publication, but it is stamped as coming to the Library in July of 1950 so it’s very likely that 1950 is the original date.

Unfortunately, it is not possible to determine any information about How to Eat Maine Lobster other than the state agency which produced it. Judging from the simplicity of the drawings, it’s most likely that someone in the Maine Department of Sea and Shore Fisheries drew the pictures. The two earliest versions, 1950 and 1951, also mention the Maine Development Commission, an early development/tourism state agency, but the issue of who did the drawings is the same – likely someone in-house. It’s also possible that they took the drawings from somewhere else, but I think it’s more likely that it was done in-house. I’ve looked at our copies – the earliest we have is from 1950 – and there is no attribution of any sort. It wasn’t that unusual to have in-house graphics then as there were no other means of creating pictures, etc. other than using photographs.”

In browsing through some local stores I’ve noticed the same images in rather broad use. Looking around online, I found only one instance if the images being used with proper credit given, in the 1961 “Old Farmer’s Almanac”. 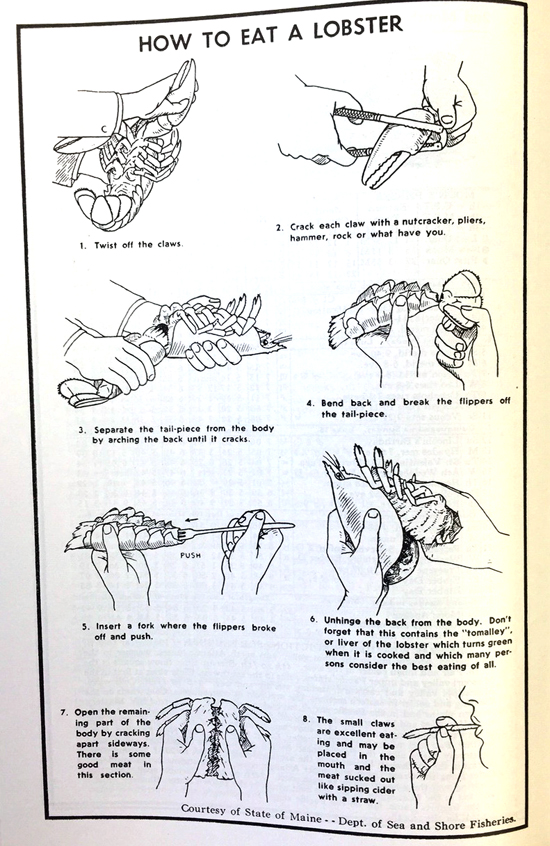 But as Ms. Stanton indicated, that’s quite alright as the images are public domain. I did find other uses of the same images and it’s interesting to see the variations. Some of these are simply colored as with the platters from the Christmas Tree Shops. Others are “cleaned up” or modified in some manner. But they’re all basically the same.

The most complete version I’ve found so far was done as a 9″ x 12″ print in about 1975 by The Lobster Shack on Two Lights Rd. in Cape Elizabeth, Maine. This 1920s shack used most of the images on both the front and the back of the pamphlet to give what was at that time the most information their diner should need. 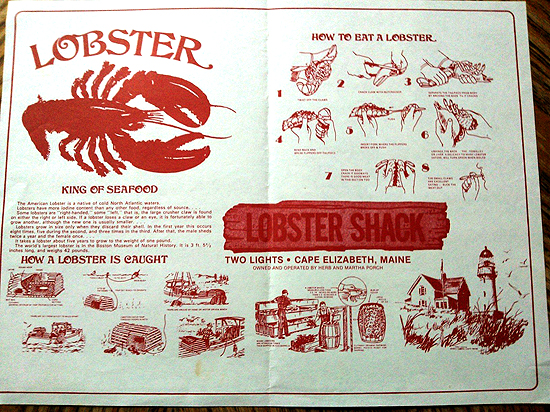 The 1975 print from The Lobster Shack in Cape Elizabeth, Maine.

Following are a few other examples. Enjoy! 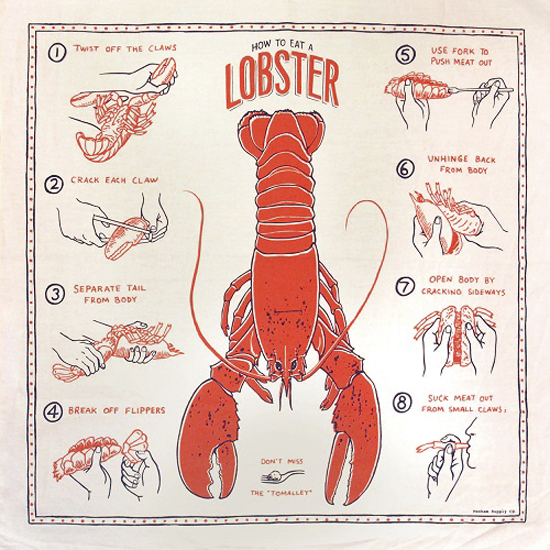 A “How To Eat A Lobster” bandana from Penham Supply Co. in Brooklyn, NY, which is also available at retail stores and lobster restaurants in New England, uses a colorized version of the infographics. 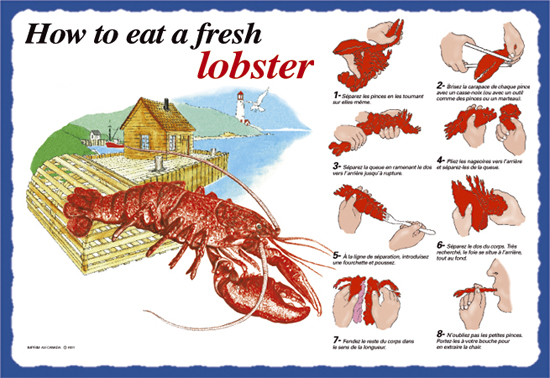 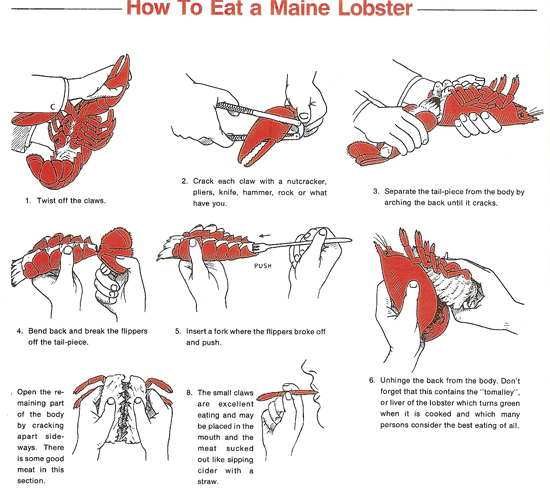 The New England LobsterBake Co. of Lakewood, Colorado, uses the infographics on their How To Eat A Lobster page. 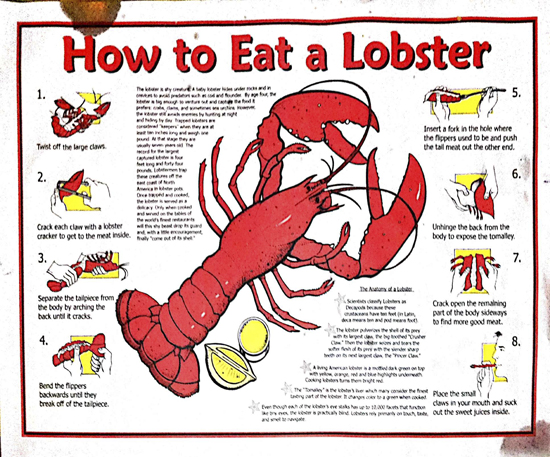 Lure, a seafood restaurant in Atlanta, Georgia, uses a highly-modified version of the Maine infographics on this work, which may be a table card of some sort. 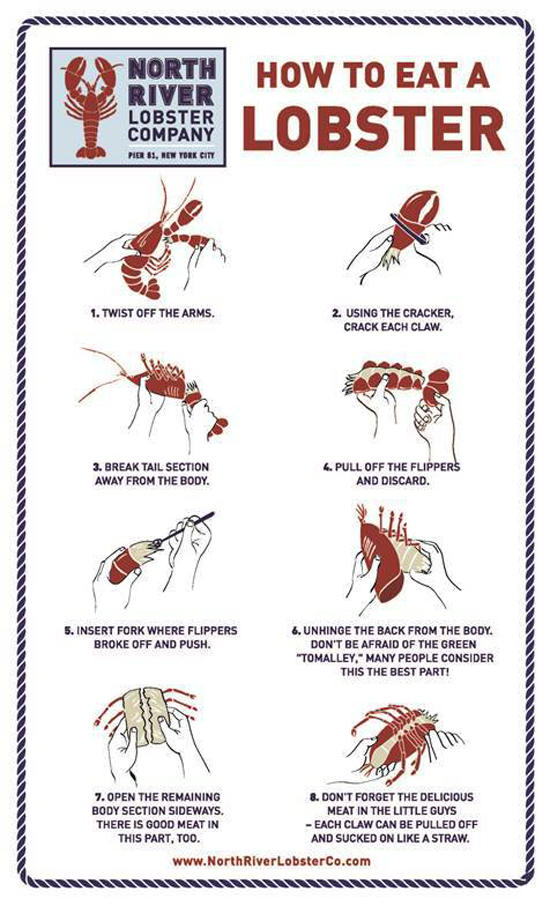 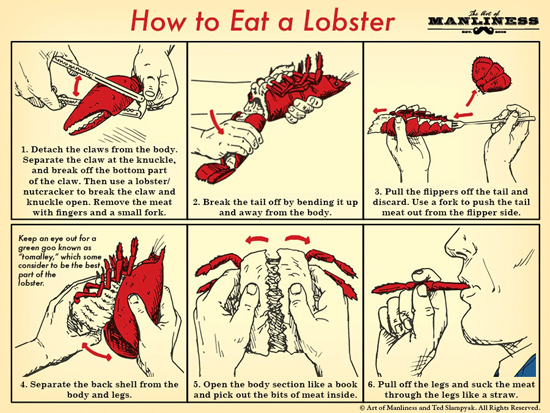 The web site The Art Of Manliness once published “How To Eat Lobster: An Illustrated Guide“, which used only six of the images which were enhanced to fit the site’s graphical style. At the bottom right it says “© Art of Manliness and Ted Slampyak. All Rights Reserved.” 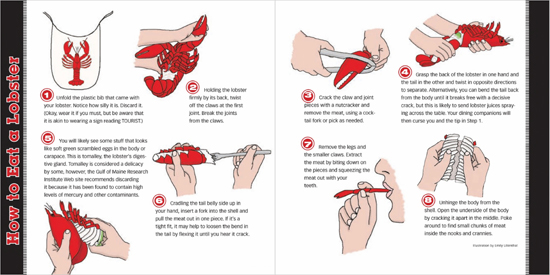 In 2012 Down East Books published “The Maine Lobster Book” by Virginia M. Wright, with the earlier infographics being cleaned up for pages 98 – 99 and attributed to an Emily Lillenthal.