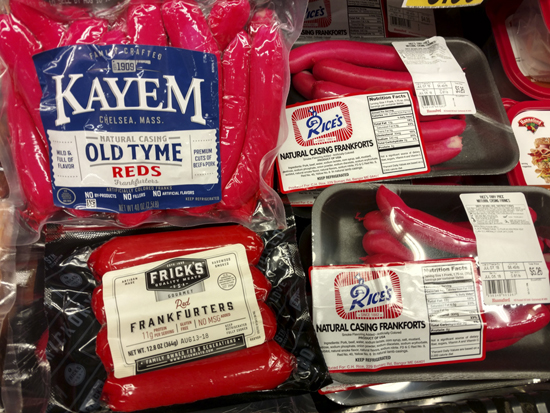 Red frankfurters in a grocery case in Lewiston, Maine.

Local and regional traditions are important in many ways, and can be informational, historical, or even humorous in nature. For example, some of the oddest hot dogs I’ve seen are the red frankfurters of Maine. I was curious when I saw these in the grocery store so I asked a manager if they were hot or somehow spicy. “No, they’re not.” How are they different from other natural casing frankfurters from the same meatpackers? “They taste the same” was the answer. Then why are they red? “I really don’t know, that’s always confused me, too.”

Red frankfurters are served in what are called Frankfurter or Frankfort Rolls.

Curious, I flipped over one of the packages of red frankfurters:

Searching the case I found some meatpackers also throw in FD&C Yellow #6.

I then located the Natural Casing Frankfurters from the same meatpacker:

The only obvious difference is the red coloring. The amounts of the other ingredients may have differed, but it wasn’t likely. From a food manufacturing standpoint, I imagined the process would put the completed natural casing frankfurters through a vat of dye prior to packaging.

None of it made any sense at all. 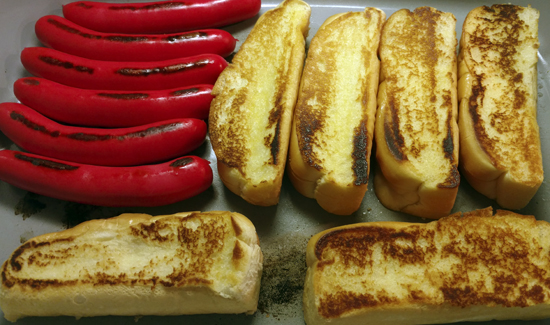 Prepping the red hot dogs and buns in an electric skillet. The buns are buttered before grilling.

Local media in Maine reports on this from time-to-time, noting not only the popularity but also versions of the reason behind the red coloring:

“W.A. Bean & Sons … has been making the natural casing treats since 1918 … ‘We are the only makers of the red hot dogs left in the state of Maine,’ [Sean Smith, director of marketing and sales development] said … W.A. Bean produces an estimated 400,000 pounds of snappers each year, both under its own name and the Rice’s label that the family began producing nearly a decade ago, after negotiating a deal with its former owner and former competitor.

Smith said the company used to have a large U.S. map on display, with push pins marking everywhere their snappers were shipped, sometimes in orders as large as 10 pounds at a time. Over time, the map became so crowded that maintaining it was no longer feasible … Maine exiles also snatch them up while visiting ‘home’ to bring back to share with their families and friends, Smith said, noting that one W.A. Bean fan from North Carolina drives north every three or four weeks to get a fix of his favorite dog.

It isn’t entirely clear why the red coloring was introduced. One legend has it that the coloring historically was added by the original European makers of frankfurters to mask less-than-premium ingredients … Smith, however, speculated that W.A. Bean added its signature coloring as a way of making its frankfurters stand out amid a sea of competitors. ‘And it took off.’” [Gagnon, 2012]

It’s the perception of the red vs. natural colorings that is odd, that not only do people prefer it but that they’ll go to great lengths to make sure that’s what they eat, even though there are no flavor differences.

I also know of one sixth grader in 2018 who will only eat the red ones because, as his mom laughingly told me on social media, “My son won’t eat the brown. Says they taste weird.” Another acquaintance had this to say:

“Red hot dogs are popular in Hawaii too. When I was signing the papers to close on the house, the mortgage guy was telling us all about a trip he just took to NY, but he ended up staying in the room because he got sick and he thought it was the ‘brown hot dogs’, his colleague said, disgustedly, ‘YOU eat BROWN hotdogs?!’ The rest of us died laughing.”

The cuisinologist in me had to discover the true origin, and as it turns out, it does exist. The London-based Newcomen Society “exists to encourage study of the history of engineering and technology from ancient times to the present day.” The former American arm of the Society, founded in 1939 and disbanded in 2007, held their “1992 Maine Meeting” in Portland. Joseph “Chet” Jordan, grandson of the local meatpacker Jordan’s Meats founder and Chairman of the company at the time, was the Guest Of Honor. He gave the address “Jordan’s Meats: A Thriving Business in Its Third Generation–built Primarily on ‘hot Dogs'” on October 9th. The Society subsequently published the text of his address in 1993 as a 24-page pamphlet with historical photos from Jordan’s Meats. Mr. Jordan’s address specifically addressed the history of Maine’s red frankfurters.

“… Charles and Richard Schonland … were sons of German immigrants, and their father ran the leading sausage business in Lawrence [Massachusetts]. In 1891, the brothers had decided to found their own company and ‘investigated several cities’ before deciding on Portland. Schonlands began operations in a leased building … but later built their own building … Schonlands introduced the so called ‘red franks’ to Maine, and their distribution was Portland, Lewiston, Auburn, Biddeford, Saco and Sanford. This is why the ‘red franks’ today are still popular in those areas. They colored their hot dogs red to differentiate their product from the competition … Pa worked at Schonland Brothers, where he learned much and planned for the day when he could start his own company … [I]n 1927, the year I was born, my parents founded Jordan’s Ready-To-Eat-Meats … In 1935 a major benchmark was reached when Pa purchased Schonland Brothers, his former employers … [T]he red hot dogs that so many people associate with Jordan’s are only one of our many products. As I mentioned before this was a kind of trademark for Schonland Brothers which was continued by Jordan’s after the purchase. In fact, it was Jordan’s who introduced the red franks to Aroostook County in the mid-1930s. The ingredients of the red frank are identical to those in our uncolored franks, but demand for the red frank is still traditional in many parts of the state.” [Jordan, 1993: 8, 10, 12, 13, 14]

The tradition of Maine’s red hot dogs has relocated since Chet Jordan’s address. Jordan’s Meats had bought C.H. Rice Co. in Bangor back in 1962. [Jordan 1993: 19] The Iowa Beef Co. subsequently purchased Jordan’s in 2001, which Tyson Foods then bought in 2003. Tyson then closed Jordan’s Augusta plant, where Rice’s red frankforts were made, in 2004. Later that year, the Rice family bought its name back from Tyson Foods and formed a partnership with Bangor sausagemaker W.A. Bean to begin making the Rice version of the red hot dog again. [Associated Press, 2004] In 2008 Kayem Foods of Chelsea, Massachusetts, announced they had purchased the Jordan’s Meats brand from Tyson Foods, along with six other local brands. [Kayem Foods, 2008] Tyson Foods had closed the Jordan’s Meats plant in Portland in 2005, which then burned on May 6, 2010. [Hoey, 2010] As of the time of this writing, W.A. Bean is still producing both their own and the C.H. Rice versions of Maine’s red hot dog in Bangor and is the only in-state manufacturer of the product. [Gagnon, 2012] 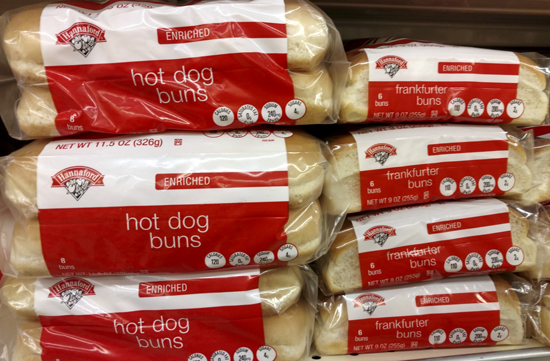 Hot dog buns next to Frankfurt Rolls at a Hannaford store in Maine. A “Frankfort Roll” or “Frankfurter Roll” in New England and New York state is a top-split bun with flat sides that’s either buttered and grilled for use with New England hot dogs or seafood rolls, or steamed for use with coney dogs or frankfurters.

The traditional story of the Frankfurt or Frankfurter Roll used with Maine’s red hot dogs, as well as other preparations such as the Lobster Roll, is that sometime in the 1940s the Howard Johnson’s chain commissioned the J.J. Nissen baking company in Maine to create the roll for their fried clam sandwich. USA Pan® is also credited with developing the pan to create the roll. [Tucker, 2020] 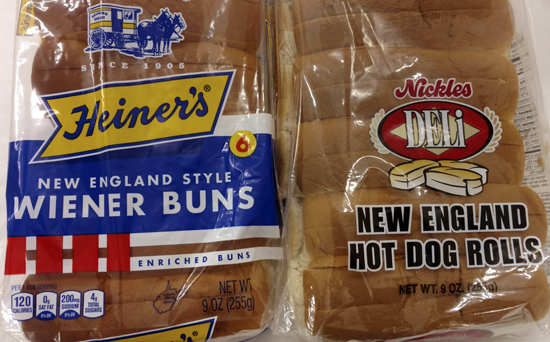 The same style of bun is marketed in other parts of the country as a “coney” or “New England” roll. These are two brands available at a grocery store in Ohio. Wonder also offers a New England roll, available in various parts of the U.S.

Images provided by Food Historian Dr. Eleanor Bartlett of the University of Cambridge (@historyeats) indicated that evidence from Europe strongly suggests this really wasn’t a new development in any manner. The soft French roll, a light bread dough rolled out thinly then rolled into a tight cylinder before baking closely to one another, had been included in paintings as far back as the early 17th century. Visually almost identical to the roll developed by J.J. Nissen, it appears the only real differences are the addition of the top slice for insertion of the meat or seafood components, and the buttering and grilling of the sides of the rolls. 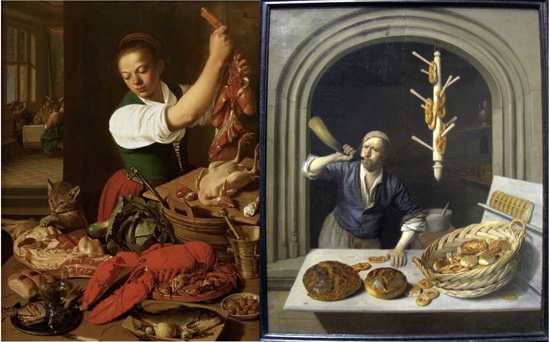 Left: Kitchen interior with a maid preparing meat and gentlemen drinking at a table beyond, by Jeremias van Winghe, 1613; Right: The Baker, Job Adriaenszoon Berckheyde, 1681. 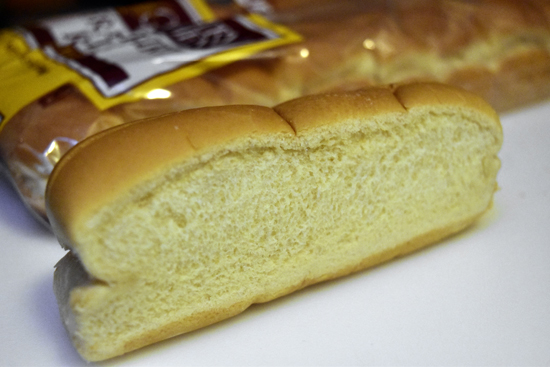 A Frankfurt Roll as made by Country Kitchen, a commercial bakery in Lewiston, Maine.

To bake the buns properly, USA Pan® offers a retail ten-bun New England Roll pan for use with any recipe for the buns. Why 10, and not 8? I’m guessing that’s because the end buns only have one side that’s flat and grillable.

Many commercial Frankfurt or New England rolls are made of a simple bread dough. The recipe USA® Pan offers for use with their pan includes milk, butter, and potato flakes. It also describes the dough as being stretched and placed in the pan as a whole before the second proofing instead of the rolls being individually formed. This is clearly how the commercial buns are made that are available in New England groceries, and would be the most authentic. Unlike other recipes though it calls for instant yeast vs. active yeast.

To get the buttery sweetness of a good New England classic, use one of the better recipes for a Parker House Roll, such as this recipe from the James Beard Foundation. Originally developed at Boston’s venerable Parker House Hotel, the roll is not only still served there, its recipe has been printed in countless cookbooks since Fannie Farmer’s first Boston Cooking School Cook Book in 1896.

Other available recipes available include butter, and either milk or milk flakes, minus the potato flakes, making for a fluffier roll with less density. A version from The Flavor Blender illustrates forming the buns individually. King Arthur Flour has posted this recipe for a version which also includes potato flour or flakes. In the King Arthur version the buns are formed in the pan as a flat layer, which is then cut into the individual rolls after baking.

I haven’t attempted the following recipe as of May 30, 2020, but I intend to the first week in June. I’ve adapted it from the “Everything Parker House Rolls” recipe by Erin Jeanne McDowell for the New York Times, with the layout and baking technique from the recipe for the pan itself from USA Pan®. Laying out the dough in one piece in the pan, then slicing into individual buns after baking, follows what’s available from grocers and in restaurants and lobster pounds.

A recipe for use with the New England Roll pan from USA Pan®. Adapted from the "Everything Parker House Rolls" recipe by Erin Jeanne McDowell for the New York Times, with the layout and baking technique from the recipe by USA Pan®. Laying out the dough in one piece in the pan, then slicing into individual buns after baking, follows what's available from grocers and in restaurants and lobster pounds.
Prep Time3 hrs 15 mins
Cook Time18 mins
Total Time3 hrs 33 mins
Course: Breads
Keyword: Frankfurt buns, Frankfurt rolls, New England buns, New England rolls
Servings: 10 rolls

If using an electric stand mixer...

If kneading by hand...