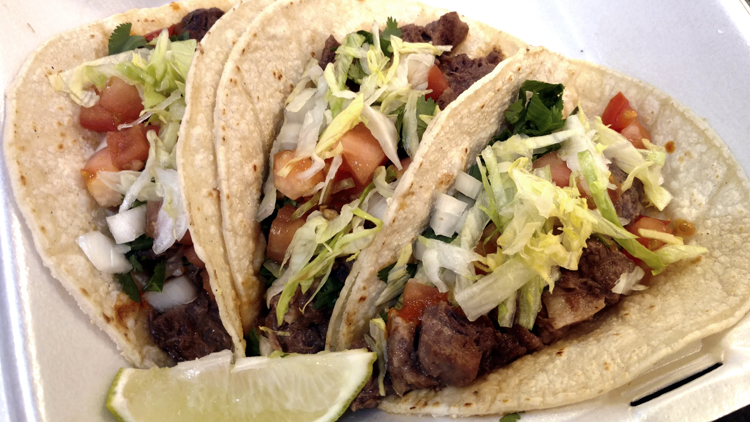 Lengua Tacos I enjoyed from Rosa’s & Ruben’s Mexican Taqueria, a food truck serving authentic dishes in Cody, Wyoming, on April 19, 2019. This dish was off-menu, but I knew what I wanted and it was available.

Over on Fine Dining Lovers, respecting authenticity in a country’s cuisine was brought to the fore in an article titled “Italian Owner Responds Hilariuosly On TripAdvisor” on April 29, 2019. The article’s title aside, and regardless of American traditions, it’s simply inappropriate in Italy to add cheese to any fish or seafood dish whatsoever, even if it’s something such as a crab ravioli. That’s the Italian way. After taking the reviewing diner to task for slamming the restaurant for denying said request, the owner of the restaurant finished his rant against the diner’s poor review with “… there are a lot of fake Italian restaurants run by fool greedy and consciousless people that allow any kind of abominy.”

Was the owner right in this? Absolutely. Was the article’s author correct in stating “Now, the customer is usually always right…”? No, not at all.

The Westernization of the world’s cuisines is a real issue. And the customer is not always right, regardless of the popularity of the saying.

Friends of mine and I discussed this article on social media and some issues were raised. The link to the article had been posted by a friend of Italian descent, who advocated against the addition of cheese to fish and seafood dishes as she always had, stressing authenticity. A couple others mentioned the possibility of taking your own cheese to such an establishment. Sure, you can take your own cheese if you want to be pitched out the door on your ear. But honestly, do yourself a favor and don’t do that. Another friend, a retired butcher, presented the following scenario:

“Let me play the devils advocate here, beings I’m of Irish, Scots, German, and Polish descent … What if I didn’t know the *rules* about no cheese on seafood, and I went into a nice Italian restaurant, and asked for cheese for my seafood. I would appreciate the waiters wisdom and advice, but as I was going to be the one paying for my meal, and I wanted cheese, I’d certainly expect it … With that being said, the customer is never, ever, always right.”

I replied, “If they don’t have it and, more importantly, if their aim is to be authentic, then no, you don’t get any cheese. Chez Pim at Kin Khao in San Francisco is a prime example of this. She does authentic Thai food. Period. You don’t want to tell her how to do that.”

We explore culture through food. Bourdain was one of the best at this. And when Dr. Lucy Long coined the term “culinary tourism” that’s exactly what she meant, exploring culture through food, not the bus tours or progressive dinners the term has come to imply. If you think you know another culture or region and its food, you honestly probably don’t. And if you don’t care to learn, that’s on you. But we all originally enjoy what we grew up with, learning more tastes along the way. If you want to force your own narrow “knowledge” on others, especially without admitting you’re doing so, especially onto those who know more about what they’re talking about or cooking a particular cuisine than you do, that’s rather arrogant on your part. And you deserve to be pitched out the door.

Take another look at the photo of the Lengua Tacos at the beginning of this post. When I walked up to the window of the food truck that is Rosa’s & Ruben’s Mexican Taqueria for the first time the week before, Ruben himself was the one taking the orders. I ordered what Mary had asked for, a Chicken Burrito, but since I realized Ruben was indeed Mexican I asked if they had Lengua Tacos, which have slow-simmered seasoned beef tongue as the main ingredient. One of the gentlemen I’d previously worked with in a kitchen was from Mexico City. It was he who gave me such an appreciation for authentic Mexican foods, sending me to a local restaurant in Monticello, Indiana, for their Lengua Tacos. There in Cody, Wyoming, a surprised Ruben said he didn’t have any, but since the family makes it for themselves they’d planned on having some the following week. I still went off-menu, asking for tacos they way he liked them. The Beef Carnitas Tacos I ended up with were moist and tender, seasoned nicely with a savory flavor giving good spice on the back end.

Those few minutes with Ruben are my point:

When experiencing the food of another culture, especially if the cook or restaurant represent that culture in an authentic manner, eating what they eat, the way they eat and enjoy it, is the best method for respecting both the culture and those you’re then learning from.

The following week when Mary and I went back to the truck, the Lengua Tacos were indeed ready. Given the cost of beef tongue vs. the cost of other cuts of beef the truck uses in their dishes, I discussed with him charging $10 for the three tacos instead of the $8 menu price for the “standard” tacos. He really hadn’t sold many Lengua Tacos until I came along and specifically asked for them, so he wouldn’t accept more for them.

I dropped the extra money into the tip jar anyway.

I’ve enjoyed Lengua Tacos at probably more than a half-dozen authentic Mexican restaurants in Indiana, Michigan, and Ohio. In none of those restaurants was the beef tongue “gamey” as described by those who really don’t like the ingredient itself. But Ruben’s was different in that it wasn’t a cube having a bit of a “bite” to the texture, as I’d experienced before. Instead, the texture was more representative of a good pulled beef brisket: I found I could pull the simmered and seasoned beef tongue apart with my fingers, something I’d never experienced before. As stated by Jennifer McLagan in her book on offal, “Odd Bits: How To Cook The Rest Of The Animal”, “Tongue must be poached until it is very tender, and you relly can’t overcook it.” While McLagan says to simmer it from 1.5 to 2.5 hours, the 1943 edition of Irma Rombauer’s “The Joy Of Cooking” says 3 hours.

I’m guessing Ruben simmers the beef tongue for their family’s Lengua Tacos for quite a long time. It’s that tender.

Here are some points to remember, and to practice, when exploring and enjoying other cultures and their foods:

When it comes to food and the foods of others, you are not always right and never will be. None of us will ever know that much about it. Learn from others, their culture, their cooking, their menus, their way of eating, their traditions, their knowledge. Enjoy the differences. That’s what exploring culture through food is about.