Let’s get this out of the way: I am not a foodie. And it’s quite possible that, by definition, you aren’t either.

Oxford Dictionaries define a foodie as “a person with a particular interest in food; a gourmet”. Moving then to the Oxford definition for the older word gourmet, “a connoisseur of good food; a person with a discerning palate”, it becomes clear that a foodie is, by definition, a bit of what many would consider a “food snob”. The use of the phrase “good food” in Oxford’s definition for gourmet, coupled with the use of the word connoisseur, is the first thing that sets me off. The second definition then includes the phrase “discerning palate”. There’s an implication in these definitions that only higher-end foods are “good food” to either a foodie or a previously-labeled gourmet. 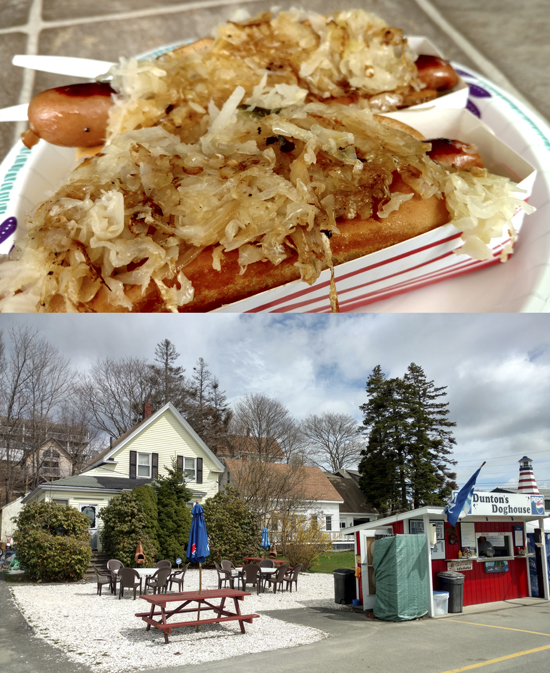 Dunton’s Doghouse in Boothbay Harbor, Maine, on April 28, 2018. The white area around the picnic tables is gravel, not snow, and it was a comfortably warm day for that time of year.

Consider a pair of hot dogs bought from a long-time permanent food stand on the front lawn of someone’s home in Boothbay Harbor, Maine, Dunton’s Doghouse. Those hot dogs, technically a locally-made frankfurter with a natural casing, beautifully spiced, served steaming hot on a grilled bun and topped with grilled local sauerkraut that’s made the old-fashioned way of fermenting nothing more than salted cabbage, and served on a grilled bun, are decidedly “good food”. They’re some of the best dogs I’ve ever eaten, and I’ve had a lot. My wife and I could easily eat at Dunton’s often. But if you consider that it’s a hot dog, from a stand in front of someone’s home alongside the road in Maine, it quickly becomes apparent that someone with a “descerning palate”, a gourmet, “a connoisseur of good food” … a foodie … would turn their nose up at it.

Merriam-Webster takes the word foodie a step further in the wrong direction by defining it as “a person having an avid interest in the latest food fads”. I have zero interest in food fads, such as molecular gastronomy, joining the electric pressure cooker craze (I have an old-style stovetop pressure cooker instead), collecting gadgets (I’ll gladly slice bananas with a paring knife like a normal person), focusing on dishes that won’t be around long (avocado toast is good, but it’s not that good), “dump” anything (adding better canned foods or mixes to a dish isn’t “dumping”, it’s called cooking), or paying multiple American dollars for a cup of coffee that either tastes burnt or takes more than three or four words to order.

Foodies also tend to get caught up in having what designers and real estate agents call a “chef’s kitchen” or “gourmet kitchen”. There has to be a better gas stove from certain manufacturers, with a vent hood that probably cost more than a commercial hood system, a pot filler faucet on the wall over that range, a “farmhouse” sink with an overhead hose, a commercial refrigerator/freezer (separate units are even better), an island with both a prep sink and a built-in grill with its own retracting in-counter vent system, a thick bamboo cutting board like the ones on the TV shows … and a stand mixer. Have to have that stand mixer. That thing’s a big deal.

That gear doesn’t really interest me at home. Unless you’re cooking in a restaurant or entertaining at least weekly, those pieces of equipment aren’t necessary.

Foodies and gourmets alike, again by definition, don’t actively appreciate how the rest of the world cooks below a certain level of finesse, and tend to also brush off anything outside their comfort zone.

That’s not me, nor is it how a lot of people who are referred to as foodies are.